Today the Queen of England came to Northern Ireland and shook the hand of Martin McGuinness, the leader of Sinn Fein and a former IRA combatant. The significance of this can not be overstated: it is one of the most potent symbols of the peace process in the last decade. At the same time, the Queen's visit was not uncontested. Yesterday, a 40 foot Irish flag appeared on Black Mountain, accompanied by the old word for Ireland, Eriu. The message was clear: Ireland is our queen. 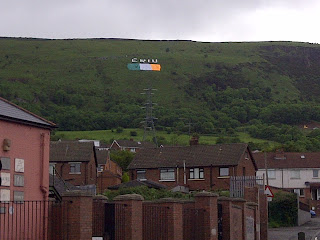 The flag was placed and guarded by Republicans, and last night a group of loyalists tried to remove the flag. A fight broke out, with several injuries. Catholic youths retaliated, throwing bricks through the windows of Protestant shops in a neighboring community. The flag is still on the mountain today, and we could just make out the shapes of a mass of people standing guard.

We walked through this West Belfast neighborhood to visit Jessica, a colleague from INCORE who works with Belfast Conflict Resolution Consortium (BCRC). For years, republic and loyalist groups would not talk directly with one another without intermediaries. BCRC formed after the disarming of the paramilitary organizations, bringing together two of the largest loyalist groups with two of the largest republican groups to work together to keep peace and strengthen their communities. Ironically, their main office is located in a Catholic neighborhood, and the loyalist staff members do not feel comfortable or safe coming to work. The staff remains segregated on opposite sides of the many walls that divide this city (not only are their walls above ground, there are walls below. When the Catholic cemetery was forced to open space for Protestants to be buried, the priest required a subterranean wall to be built separating the two communities). 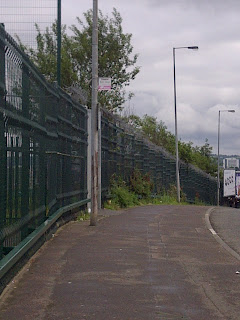 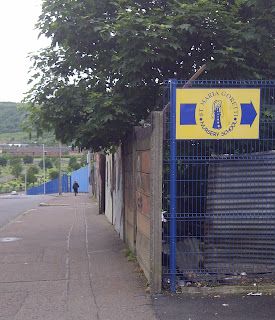 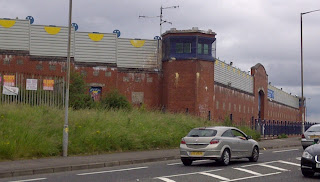 BCRC's work is both peace keeping and peace building: on nights like last, community delegates on each side work to deescalate conflict, and send word to one another and the police about what is going on. BCRC also facilitates community development projects, bringing people together around common ground concerns like economic development.

We ended the day with Barry, another colleague from INCORE who works with  Cooperation Ireland. Cooperation Ireland works on the macro level - organizing today's historic meeting between the Queen and McGuinness, as well as on the community level.  Barry is Catholic; his office is based in a heavily Protestant neighborhood. His latest project involves outreach to British military families stationed in Belfast while their loved ones are deployed in Iraq and Afghanistan.

Perhaps unsurprisingly (as it happens in the U.S. as well), there is a fair amount of competition among the peace-building organizations around who is doing the "real work." From an outside perspective, all the work appears incredibly valuable and needed. These two organizations, for example, have different spheres of influence. They are able to affect different types of change. Both are incredibly relevant to the history that has been made today. 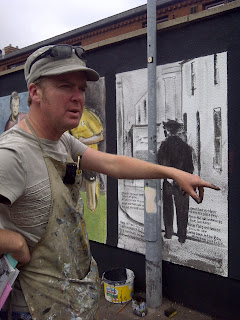 One of the sweetest moments of the day was stumbling upon Ned Reynolds, a muralist from the Republic who now lives in Belfast. He is just completing a community mural project as part of a revitalization project of South Belfast's  Sandy Row. The neighborhood identified images of people from their community to recognize - from the opera singing butcher to sports heroes. Their faces now line the block. As we were visiting with Ned, an old timer came by to talk about the people he remembered and learn about the people he didn't know. One of the many small, significant projects to shift the stories this community tells about itself.