Belfast is full of beauty and culture and history and sadness. We were drawn into the Ulster Museum by the Da Vinci drawings, but captivated by the exhibit, "From Plantation to Power Sharing," charting the relationship between England and Ireland from the 1500's. It's been a long conflict.

Belfast is roughly divided into five communities. Central Belfast is home to two college campuses and is very international; there are people from at least seven countries in our hostel. The rest of the city is divided north, south, east, and west. We took a Black Cab Tour of West Belfast, where a 40" Peace Wall runs between Protestant and Catholic neighborhoods. There are four gates that lock each night at 10 P.M., keeping cars and pedestrians from passing into one another's territory. 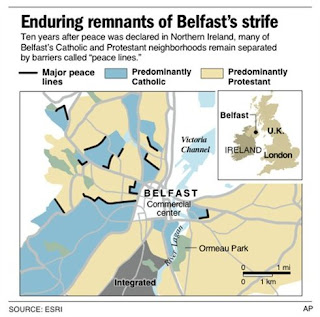 A map of Belfast's walls. 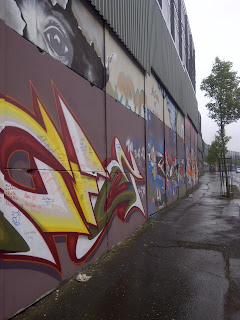 A view of a West Belfast wall, from the Protestant side

The West Belfast wall separates poor communities from poor communities, each who have been promised economic advancement by their respective political parties (as in decent housing and schools) that, by the look of things, has never been delivered. 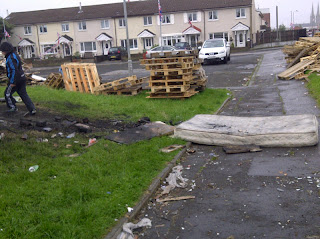 The Protestant's are preparing for the annual July 11 bonfire, which, according to wikipedia and Walter, our tour guide, commemorates "the victory of Protestant king William of Orange over Catholic King James II at the Battle of the Boyne (1690)." This pallet bonfire will rise above the top of the wall, sending a message to the entire city. After a week thinking about discourse analysis, I wonder: what is the intended message? for whom is it intended? 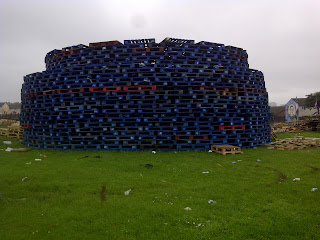 As in Derry, murals tell a powerful story as each side of the wall memorializes their fallen and their heroes. Once again, I am struck by the ways violence is memorialized, ritualized, glorified and normalized in Northern Ireland. As an artist, I wonder how art making helps people to make sense of their lived experience and integrate their loss, trauma, and grief. As a peace-practitioner, I wonder how art serves as a powerful propaganda perpetuating mistrust, disgust, and violence. 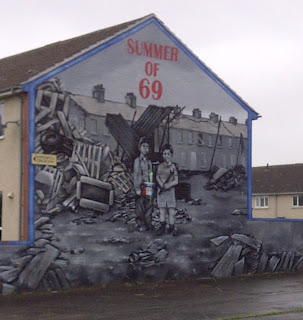 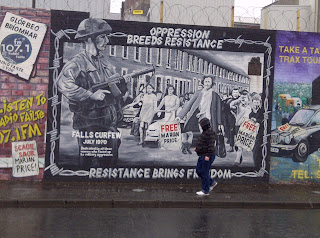 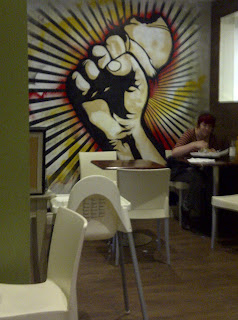