It was bittersweet to leave Derry today. Yesterday we finished out the program with presentations from some of our colleagues. The expertise in the room covered the globe: Fatima presented on her work with UNESCO in Haiti; Csabas on the history of conflict between Hungary and Serbia, Romania and Slovenia; Waqo on his efforts to curb sectarian hate speech in Kenya. Perhaps most compelling for me was hearing from the folks leading community-based (as opposed to government sponsored) work here in Ireland. Carole works at an adult education center in Belfast using the arts to bring people together to envision a shared future. Barry works at Cooperation Ireland, and has led city wide youth projects in Belfast exploring the impacts of the past on their lives today. Thankfully, I’ll be visiting the Belfast crew next week, and seeing some of their work firsthand.

So, what have I learned this first week? As the histories of conquest, colonization, and resistance in our own country defy easy explanation, so to do the histories here. In 1921, 26 counties in Ireland won their independence from Britain; the six counties that remained part of England are what we know as Northern Ireland. The Northern Ireland “Troubles” are often simplified for the world audience as two competing narratives: One the one hand are the Catholic Republicans who see Britain (and those loyal to the queen) as an external oppressor who continues to economically and socially suppress the Irish, and misuse government and police power. On the other hand are the Protestant Loyalists who see the Republicans as terrorists who threaten the safety, security, and livelihood of all.

The violent conflict peaked here in the 1960’s-1980; there were many hundreds of lives lost and many thousands of lives disrupted. The Good Friday Peace Agreement was signed in 1998, and a sort of political truce took told. If we imagine a continuum with peacekeeping at one end (ensuring basic safety and security, stopping violence) and peace building at the other (building relationships across group lines, increasing empathy and understanding, setting and acting on common goals), Northern Ireland is still somewhere in the middle.

There is significantly less violence, but there still is violence. There have been three killings in the last couple years, and several recent bombings.  Sectarian divisions remain deeply entrenched. In Derry, Catholics and Protestants are separated geographically, with Catholics almost exclusively west of the River Foyle and Protestants to the east. I stumbled across 1 integrated school on a run outside of Derry; 95% of children attend segregated schools. This basic division is further complicated; I have lost count of the number of groups and subgroups on each side which claim distinctions from one another with regard to how they frame the problem, understand solutions, and seek interventions.

And then of course there are all the other divisions in society that also show up here; prejudice based on ethnicity (in Derry there is a group they call Gypsies, or Traveler’s – apparently unrelated to the Roma people – who are warily regarded), gender, sexual orientation, ability, age and class.
And everything is intensified by the current economy. There is 50% unemployment among Derry youth (~ages 14-25) today. It’s nearly impossible to find a job, and even if you had the money, quite difficult to even get a meal after 7 P.M. Many restaurants and businesses have closed down; the pubs are always packed.

Most of the time it has felt like England may have won the war to keep Northern Ireland, but Derry won the battle for this city. But last night the sectarianism, recession, and divisions all seemed to collide. I left the Metro bar at 2 A.M. (more cultural research) with a group from Derry and Belfast to discover “Rovies” (Police land rovers) out in force, and officers positioned on corners with machine guns crossed against their chests. In this - the site of Bloody Sunday - police presence is always suspect, and the Derry women were quick to point out that their presence simply incites distrust, frustration, and anger. “It’s not good,” one woman explained, “there’s no reason for them to be here, and the boys roll out of the bar and see this; they’re just asking for problems.” Around the corner a church group was handing out free coffee and tea, their attempt to deescalate tensions between those leaving the pubs and the police.

I loved this week. I loved the people I met, the stories I heard, the music I experienced (including the traditional along with the very unique Derry clubbing experience), and the poetic/artistic/creative spirit that is so alive in this place. And today, I feel a little heavyhearted about it all.

I took the train to Portrush, where I have met Jenae. It’s beautiful here, and clearly loyalist territory...which feels a bit off coming out of Derry. Union Jacks fly from every lamppost. Time for more pub research… 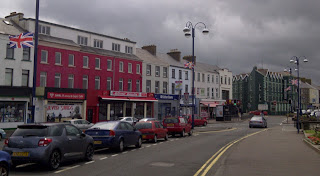