The last few days got away from me.  I spent four days in an OPRECY training, the premier training offered through Bopha’s organization. Bopha was excited that I was able to attend this particular session, as it was led in English (I'm only up to about 5 words in Khmer) by Cristopher Lee, the founder of the Human-Earth Development Center (HEDC).  Cristopher is in his late 60’s, an Australian citizen of Indonesian and Chinese heritage, who has lived and worked in Cambodia for much of the last 16 years. He spent 34 years working on the technical side of community development in developing countries. His specialty is in fisheries, and trained rice farmers, who he said all over the world are poor farmers, to add value to their farms by also raising fish. However, after years providing technical training he found that most people did not change their behaviors. He came to the conclusion that "it is wrong to assume if you teach people to know, they will do what they know."  He started HEDC in 1999 to build leadership capacity through personal empowerment. His vision is global, but his approach is individual. HEDC works to awaken the individual’s sense of purpose and meaning, their fundamental love of life, in order to help free them from the self-limiting thinking that holds so many people back from achieving their goals, or even setting goals.

Christopher talked about the way that the scarcity and danger become an operating system for so many people – their every decision is filtered through the belief that inevitably the world is not safe and there will not be enough. And while the message he delivers is that all people were born to succeed – the truth remains that for many people in Cambodia, and all over the world, resources are limited and conditions are unsafe. People are picked up every day here for being perceived as a threat to the government. Three times in two days Olivia’s driver was forced to pay bribes to law enforcement. Children attend schools where teachers are paid $30 a month – ½ the salary of a garment worker, who make poverty wages – and the way many teachers survive is to charge a “fee” for grades. The hundreds of begging amputees I have seen in this short time are testament to the landmines that still litter the country side. Every Cambodian is born to succeed- but if they do not, it is not simply because they did not believe in themselves.

And, of course, I absolutely agree with the OPRECY model – change is not possible unless we first believe it is possible.

I was struck by many things over the four days, but perhaps most significant was an overwhelming awareness of the privilege of growing up positioned in a social location where my safety was assured in my home, my neighborhood, my state and my country . Where there was never a question that my basic needs be met. Where a sense of agency – of my ability to dream and achieve - was instilled early and reinforced often.  And this experience sharpens my purpose, to continue to build communities in my own country where this is increasingly true for all. 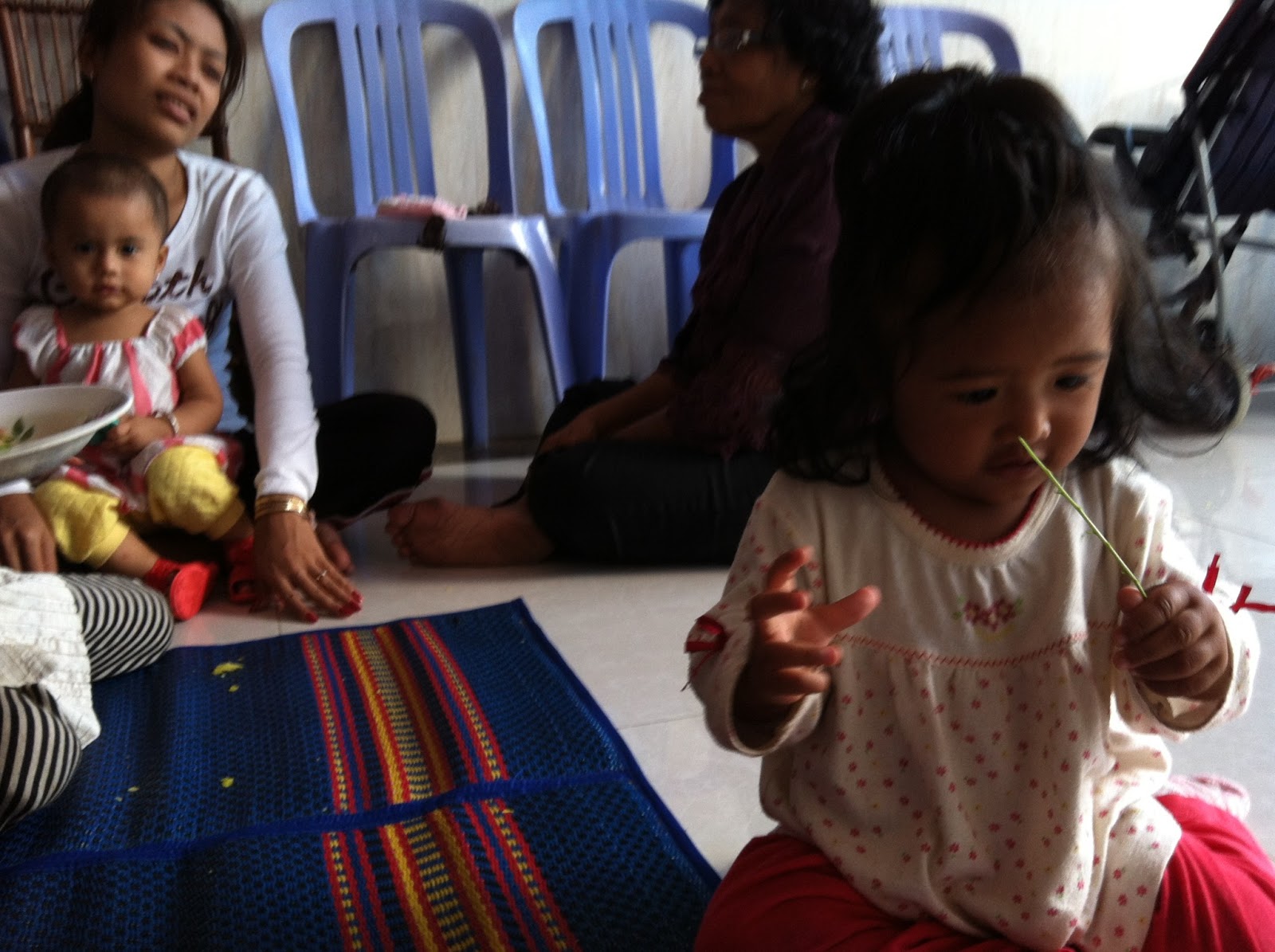 Mudhita, Bopha's youngest, playing with a stem.
Posted by Amie Thurber at 7:55 PM