The days are here are full. On all fronts.  Seeing things I do not often see, surrounded by a language I do not know, smelling and tasting and feeling things that are new to me, and are sometimes welcome, sometimes less so.

Yesterday I attended a full-day training through Bopha’s organization, attended by 381 people. The topic was goal setting, and the participants were rapt through the 8 hours, hungry for any information about how they might transform their lives. I was asked to share a testimonial to the group about how I have set and achieved the goal of starting NCBI, and the context-gap felt hard to bridge. Talking about starting an organization to people who would like to not be hungry. I did my best.

Bopha’s boss wanted to take Olivia and I out that evening, and he drove us past the most developed parts of Phnom Penh – with sky-scraper casinos and five-star hotels. We passed a Kentucky Fried Chicken, closed for the day, the street lights illuminating a group of children eating out of the trash bags. We went to a Cambodian disco, an amazing muti-generational gathering who danced the waltz, traditional Cambodian dances, tango, and Gengham Style. It was quite a night.

Today is January 7, the day the ruling party celebrates victory over the Khmer Rouge. Olivia, Mealia, Bopha and I commemorated the day at the Choeung Ek Genocide Museum, one of the many places – called Killing Fields - where Cambodians were taken by the hundreds to be executed under the Khmer Rouge regime. Mealia had never visited this place before. Over three years and eight months, one in four Cambodians were killed, mostly by poor young farmers threatened into service. Choeung Ek is the site of 129 mass graves, where 17,000 men, women and children were executed. The deaths were horrendously brutal. Not wanting to waste money on bullets, the executioners used farming tools: hatchets, hoes, machetes, and for the youngest ones, the solid trunk of this tree. 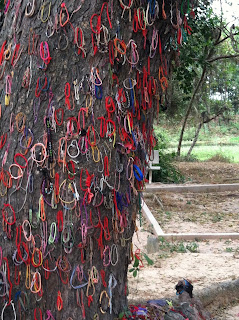 Such inhumanity is unfathomable. And in such a place, moments of humanity persevered. We heard audio from one survivor about an older inmate who advocated on his behalf, pleading that he be released because he was just a child. The man did not know the boy, and the survivor does not know the man’s name. The old man was killed for speaking out, but, somehow, the boy survived.

The four of us cried, and prayed, and then traveled down the road a ¼ mile to the home of Bopha’s sister, Navy. Her husband Vanrith cut coconuts from their tree for us to drink. Her children Madeline and Michael gathered papaya and pear to eat. We sat in the shady breeze of their yard with chickens underfoot and I was awed by the tender humanness of it all. The potential within us to be awful and kind, to be violent and compassionate, to be disconnected and to be in relationship with all that is, was, and will be. 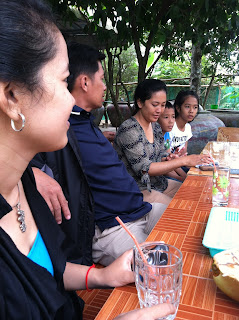 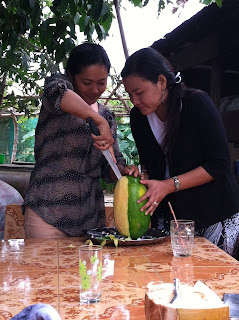 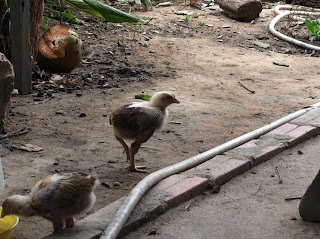