I have led two presentations during my time in Cambodia, one last week at the Sihanouk Buddhist University in Phnom Penh, and the second Monday at Pannashastra University in Siem Reap. The focus of both sessions was conflict transformation, and I worked from the NCBI assumption that the students are experts in defining the causes and consequences of violence in their community, and already know critical prevention strategies. 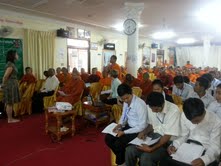 
In both sessions, students identified both individual and structural types of violence at play in Cambodia – sexual harassment, illiteracy, poverty, gangs. They were quick to share conditions in which they feel pulled to behave in ways that harm others, and also quick to identify strategies to self-regulate – meditation, singing, playing, laughing. We talked about the feelings that fuel violence – frustration, vulnerability, shame, pain, isolation – and I asked the students what strategies can we use when we see people who are feeling things things…what can we do to prevent this pain from turning into violence? At the Buddhist University one young woman said, “I think these people need us the most.” We talked about how challenging it is to move toward people who are manifesting pain, and in the end the Director of the University reiterated the importance of this point – move toward pain to transform it; greet anger with love.

After this week’s session, Sopheap, who works at the University in Siem Reap, offered to tour us around. We rented bicycles and rode a half hour out of the city to visit his village (the word here is commune – a few hundred families). Along the way we stopped at an amazing little music school, called “Music for Everyone.” The instructor has received funding from a Korean NGO to offer free music education to anyone under 24. The students were bright and determined; they played for me, and I taught them the spiritual, “we will stand the storm” (thank you, Amy Martin). 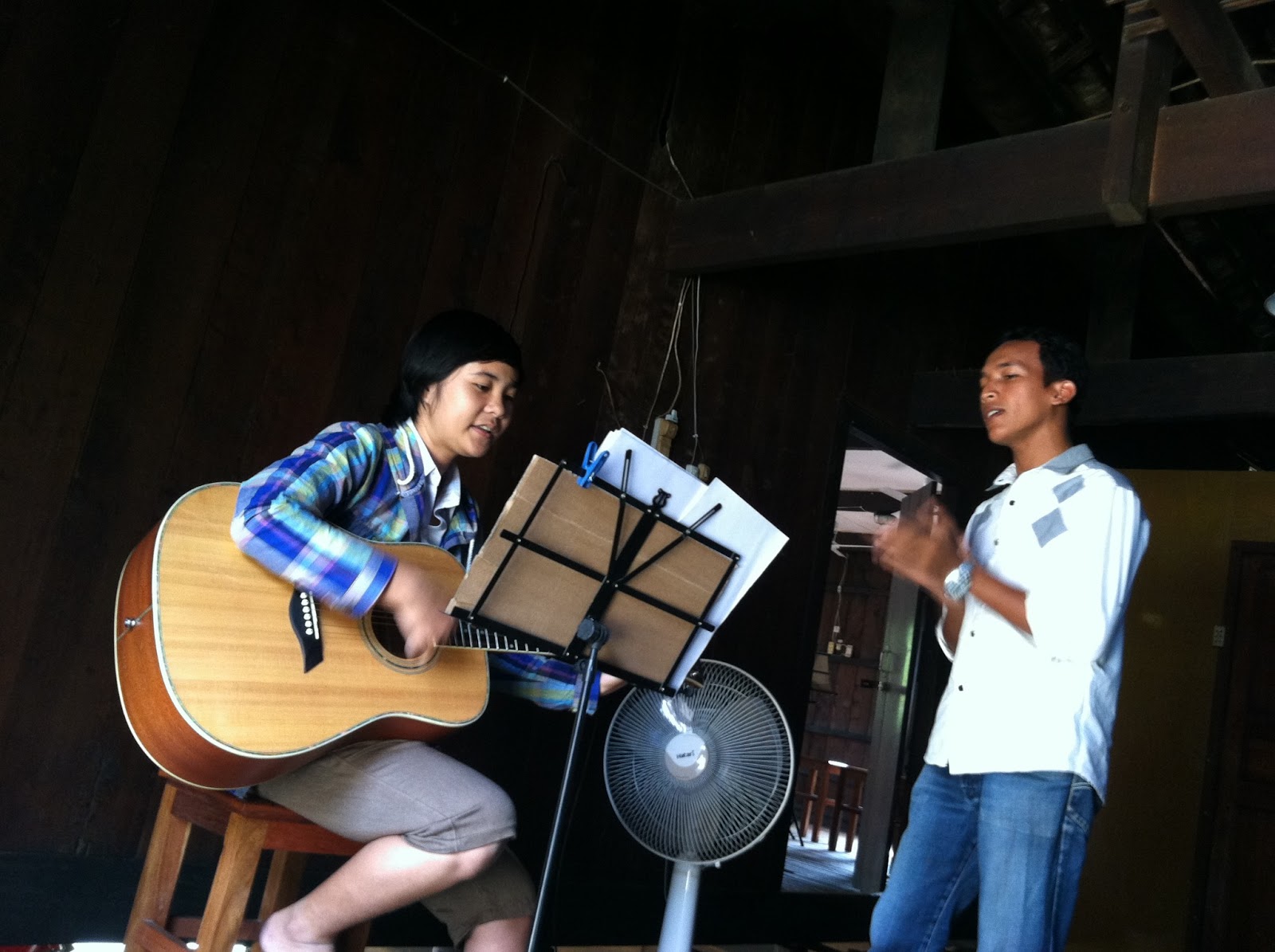 We continued on to Sopheap’s home. He is 26, and an only son. He assisted his mother to cook an incredible lunch for us –lemongrass, chicken and young bamboo soup; stir-fried chicken and cauliflower - all food from his farm. We learned that he is a rising leader in Cambodia, one of four youth representing the youth voice in debates with the three leading political parties (remember – 70% of Cambodia’s populous is under 35, and they have almost no representation in government). 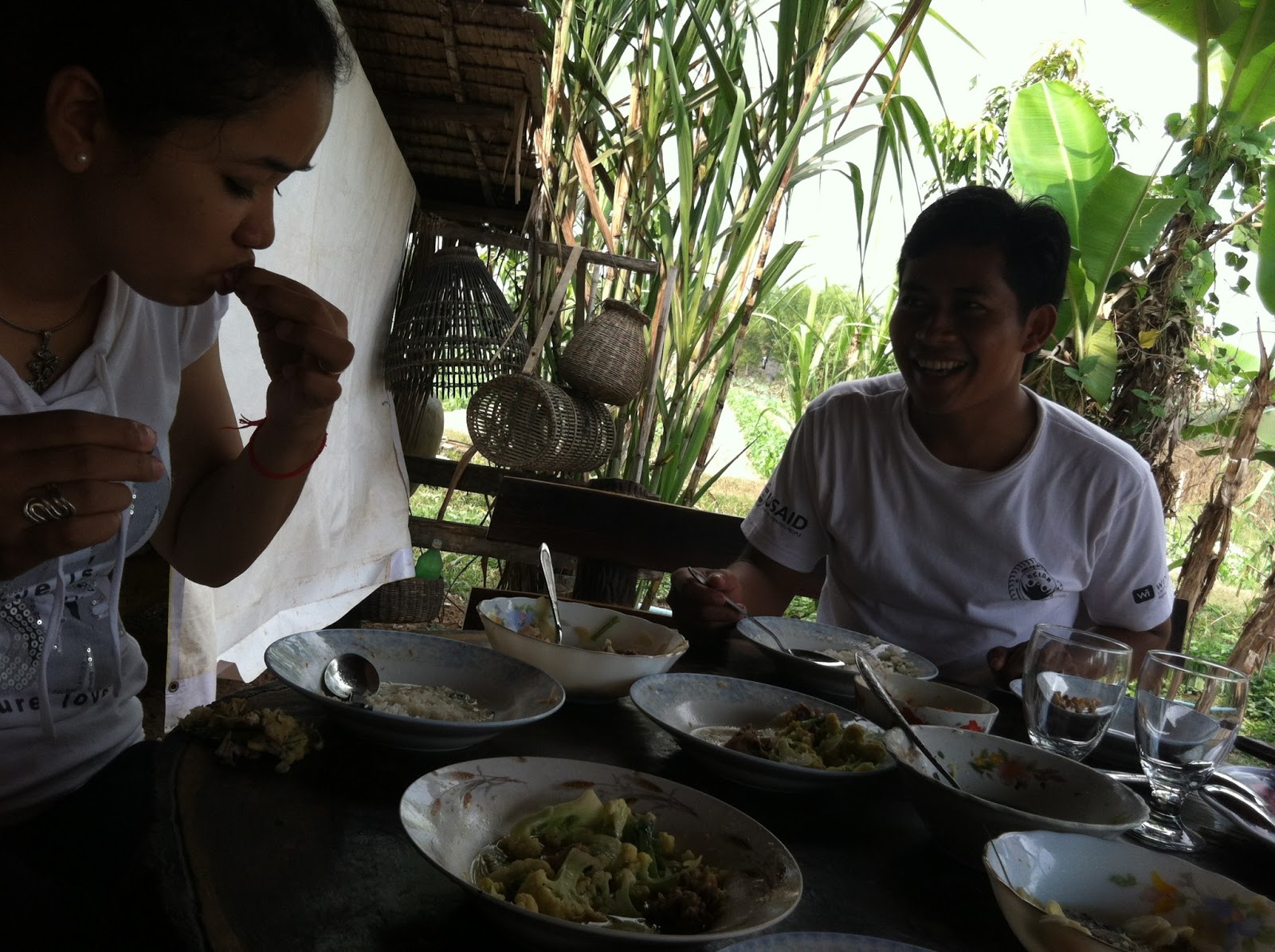 After lunch he toured us around their land, proudly showing the abundance of fruit, vegetables, fish, chicken and cows. He showed us how they make their fertilizer and animal feed, and how his commune works together to care for each other and their agricultural projects. He hopes to grow their farm to provide more jobs and economic opportunity for his commune, and at the same time be a motivational speaker to other Cambodian youth. 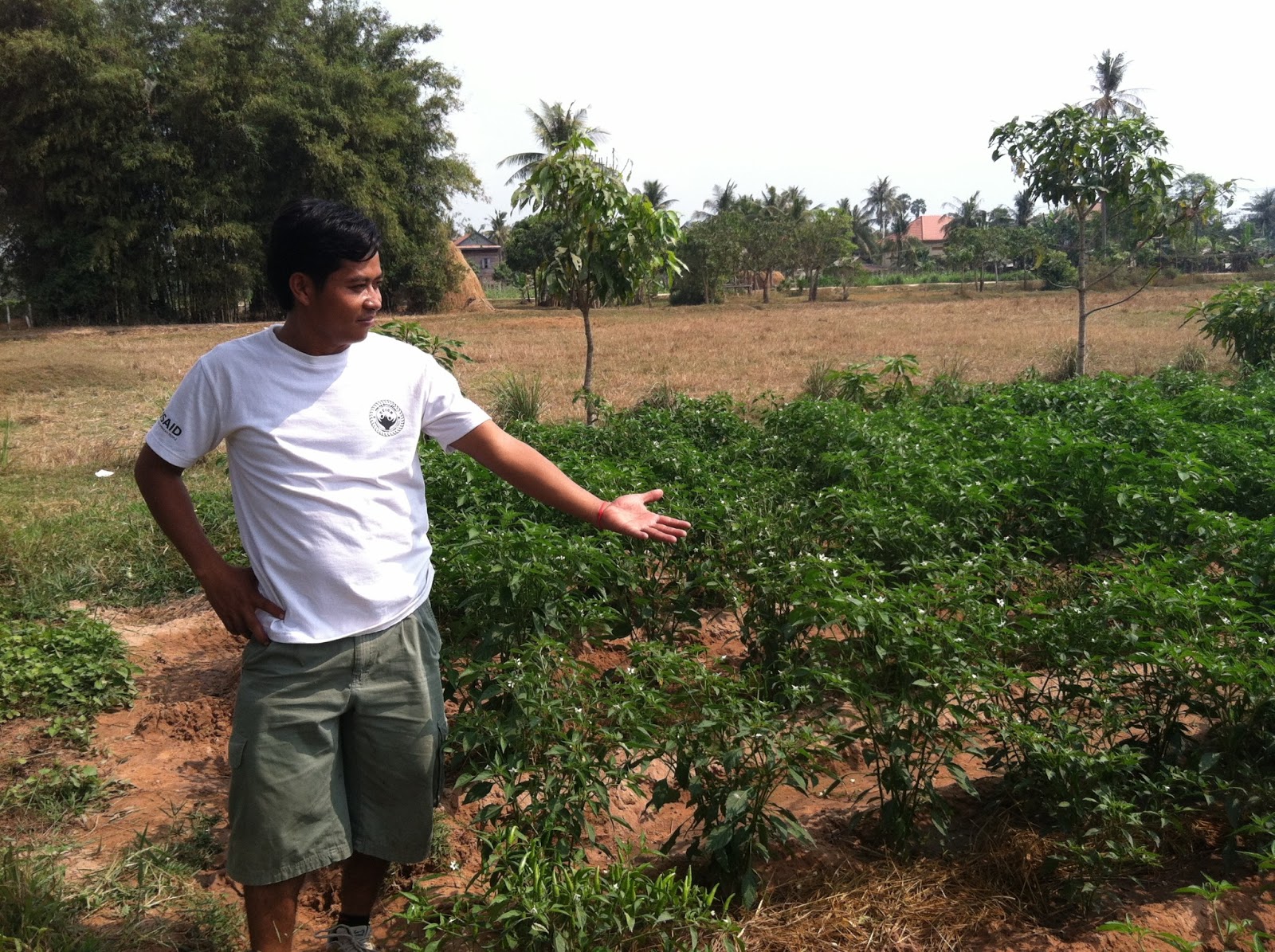 In the OPRECY course last week, the trainer said, “Happiness is having what you want. Joy is wanting what you have.” Sopheap was the most joyful person I have met in a long time.

Later that evening Bopha and I walked around the city of Siem Reap, every few minutes encountering people asking for help: landmine victims, mothers with infants, and many very young children. Begging is a hard way to make a life. Thinking about Sopheap’s community, where there is ample food and an established web of support, I asked Bopha why people come  to the cities at all – why leave that community behind? She said Sopheap’s community is unique, that after the civil war people stopped trusting one another, stopped looking to one another for help. After years of Cambodians killing Cambodians, survival became dependent on looking out for oneself. Last night the President of Pannashastra University, a determined 33 year old, took us to dinner.  I asked him the same question, and his answer was the same. “The Kmer Rouge cut almost all ties between Kmer people. That’s what Bopha and I are doing, what our generation of leaders are doing, trying to reconnect people to each other and rise up our country.”

To an outsider the work that remains to be done is daunting. Yet over and over in this short time I have been awed by the clarity of purpose of those I have met: From Mealea engaging women in democratic participation, to Bopha inspiring youth to dream for their future; from the Director of the Buddhist University providing free college education, to the young music teacher offering free music training; from Sunee, working through U.S.A.I.D  to end human trafficking throughout the country, to Sopheap working through his commune to offer a model of sustainable local agricultural development.  These young leaders have an incredible vision for the country they want to live in, and I cannot help but believe they will make it so.
Posted by Amie Thurber at 3:07 PM