The last peace-building organization I visited in the North was the Corrymeela Community, set on a hill overlooking the stunning coast of Northern Ireland. It was established in 1965 by Reverend Ray Davey. Davey had been a prisoner of war in Italy and Germany. He envisioned an ecumenical spiritual community where people live, work, and pray together as an alternative to the violence he witnessed in the world. When the troubles broke out, Corrymeela grew into a place of refuge - people who were burned out of their homes found temporary housing there - and reconciliation. Corrymeela became known for facilitating dialogue between diverse groups, teaching mediation and conflict resolution skills, and fostering positive relationships across group lines. Their physical location and space was central to their mission. They are physically removed from areas of conflict, and offer a residential setting where groups can come and stay together.

Though NCBI doesn't offer the residential experience - outside of our High School Training of Trainers - their practice, methodology, and values are very similar to our own. The setting is stunning, and even to me, a mostly secular Jew, the place felt deeply spiritual. It was easy to imagine people having transformative experiences in such a place.

But it was hard to imagine the folks from Rasharkin there, the Catholic hurlers and the Orange men and the police officers. Even if they were willing to engage in some sort of a community-building process, the community does not have resources to pay for a program at Corrymeela, and Corrymeela doesn't have the resources to orchestrate such a gathering, as they have lost much of their funding since Northern Ireland moved further into the "post-Conflict" years.

Corrymeela continues to do excellent work, leading summer programs that bring together Christian, Jewish and Muslim youth from around the world, for example. Reflecting on the range of organizations I have visited, it seems they each fill a niche, and meet a need, and that though the needs are changing they have not gone away.


Over the last month I have visited folks from a dozen peace-building programs, I have toured a handful of museums and communities in conflict, and in pubs and cabs and on beaches and mountain trails I have had probably over a hundred informal conversations with people about their experience of the troubles. My heart and mind are full of the images, stories, and songs of this place.


We'll be in the Republic of Ireland for this last week here, and though I will continue to have informal conversations about peace and conflict, my formal investigation - so far as I know - is complete. Next on the agenda is attending a stage rally (cars driving fast down windy roads)...you can guess whose idea that was! 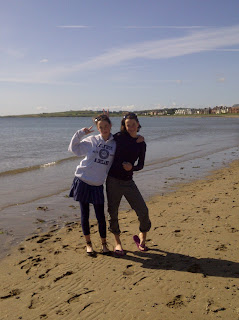 The girls this morning, on the beach in Skerries.