We packed a lot in the last couple days. I felt like I had only scratched the surface during my first week in Derry, and had a few things on my agenda to explore- namely the Protestant perspective. But first, the family took an amazing guided tour of the city put on by Martin McCrossan - I highly recommend it. He somehow condensed over 400 years of history into an easy to follow form, bringing us up through the most recent events, including the Queen's recent and first visit to Northern Ireland. Derry is a city with remarkable historical landmarks, and the tour brought these landmarks to life- whether we were talking about the building of the Derry walls in 1614, or the 1689 siege on the city, or Bloody Sunday in 1972.

The girls and  I later went to the Apprentice Boys Hall, which serves as a museum and meeting hall for   a Protestant group commemorating the protection of Derry city during the 108 day siege.  We heard about some of the same events and landmarks Martin described on the tour, but the "facts" were completely different. As we were walking out, Abigail asked, "so whose history should I believe?" Great question. Nowhere has the subjective nature of history been more apparent to me than here.

Lauren and I also spent some time in the Fountain, a small Protestant enclave within the Catholic dominated part of Derry. We visited a youth center, which is celebrating 40 years of service this year, and met an amazing woman who, alongside her husband until his passing a few years ago, founded and directs the center. In the rioting, bombing and burning that occurred following Bloody Sunday, their family had to flee her home in Derry. They returned to provide youth an alternative to involvement in paramilitary groups. "You just can't let vigilantes control your town, you just can't," she explained. Their programs have shifted over the years, but they provide a safe place for young people to hang out and opportunities for youth empowerment and development. Many of their programs are inter-generational in nature - youth engaging their elders to collect and record histories, for example.


The biggest challenges she sees today stem from the economic hardships people are under. There are 108 children who use the Center - she knows every single one, each of their parents, and most of their parents' parents. She knows their stories. Many are struggling.


When I asked her what she considered her greatest success, she reflected, "changing attitudes." This was a theme Martin, our tour guide, hammered home as well. Yes, Derry has been through a lot, and there are still disagreements, but it will absolutely, in his estimation, not go back to the way it was. He had many powerful stories to demonstrate the shifts in attitudes that have happened over the years. Toward the end of the tour, we came to a Presbyterian Church that had sat empty for a number of years. Most of it's members had moved out of the Catholic dominated neighborhood where the church stood, and the building had fallen into disrepair. But a number of Catholic leaders came together as allies to help find funding to repair and reopen the church. At the opening ceremony, the Reverend specifically thanked his friend Martin - Martin McGuinness, leader of Sinn Fein - for calling every other week to encourage the reopening of the church and help support the project. This is just one example of the hundreds of cross-community projects that have happened throughout Northern Ireland, and that rarely make news. This week, when there is sure to be plenty in the media about sectarian tension and acts of violence, it's critical to also hold on the picture of how much healing has taken place, and how committed so many are in finding new ways forward together.


We are now back in the country, in the town of Cushendall where we have made friends with a very affectionate cow. 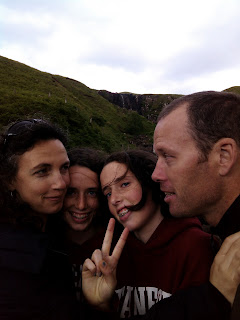 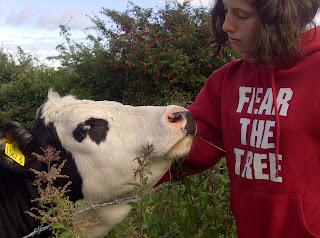