I'm back in Derry, and we can definitely feel it. July 12th is the big anniversary event for the Orange Order (and a national holiday). The ramp up to the 12th happens over several weeks, and just after we settled into our apartment they paraded through town, accompanied by strong police presence. It's hard for me to wrap my mind around...by American standards, any group should have the right to freely assemble, so, that part is not a stretch for me. I wish the Westboro Baptist Church did not have that right, but I get why they do.

But to have a Protestant sectarian/supremacist group have a national holiday, and to allow them to parade through Catholic neighborhoods, and in some areas to have the government prohibit any form of protest...that's the hard part to understand.

None the less I'm glad to be back here, because this is why I'm here - to try and understand. Tomorrow, among other things, I plan to visit the Prostesant neighborhood of Derry, and learn a bit of their perspective. I think that will help.

The week in Donegal was lovely. We were there intentionally to honor Lauren's mother's life, and mark the 1 year anniversary of her death, as that's the County Lauren has heard her line came from. The Republic of Ireland is suffering economically, and it shows in a certain weariness in the people. There is a dearth of people our age...many have left to find work elsewhere, largely in Australia and Canada, apparently.

None the less, the people we met were the kindest I've ever known. Every day, some strangers took us under their wing, talking to us about their town, buying us a drink, giving us a CD of their band, recommending places to visit. Most striking is the time people take; every day we've met people who have easily spent an hour or more just visiting with us.

And, even under tough times, there are certain luxuries the businesses provide as well. Ireland on the whole is not known for service - they don't rely on tips the way U.S. servers do. But in several outdoor cafes we have found blankets across the back of each chair; one pub in a tiny town provided free chicken wings at the half time of a soccer match; and another provided free Bailey's at the end of the meal. So sweet. 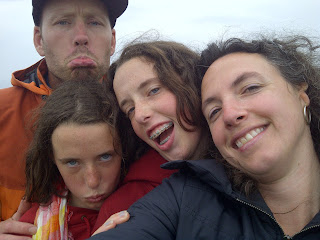