Tomorrow we head back to Dublin for our last night in Ireland. It’s hard to pick favorites from five weeks of travel. The flow was great.  A week in study, a week travelling with a girl-friend, three weeks adventuring with the family. As a student and practitioner of peace and reconciliation, the time exceeded my expectations. This blog was dedicated predominantly to those experiences, as a way of sharing with folks back home something of what I am learning, and selfishly, helping me record my learnings. But as we wind down out time here, here’s my top 10 favorite things about this trip (at least the ten that come to mind at the moment), unrelated to peace and conflict.

1.   Being called “love.” There’s something so endearing about a fellow that will approach someone standing a little lost on a street corner, map in hand, and ask, “You all right there, love?”  It happened often enough, and I always instantly felt better.
2. Dancing in Derry. I mean, yes, the countryside and coastline and fields of sheep are all incredibly beautiful, but when you live in Montana, everything is sort of beautiful all the time. The Derry “club scene” was incredible in its own right. Perhaps because the island is mostly rural, folks go all out in the cities. Think giant hair, copious makeup, los of skin, excessive sparkle. I was sure half the women were drag queens; I was wrong. I found a woman from my program, Sarah, who - in addition to being a rock star anti-racist/queer/feminist educator in Sydney - loves to dance as much as I do. We had a blast rocking to an eclectic pulsing dance mix that spanned Gaga to Paul Simon, and somehow worked. The men in Ireland aren’t known for their skills on the dance floor, but one boy from Belfast more than made up for that.

3.       Tea everywhere. It’s such a sweet ritual, really. And I learned that it’s always tea time: when you wake up, arrive somewhere, meet a friend, return home, need a pick-me-up, are gearing to go out at night, before bed...

4.      Jared and the calf. I had heard from Josie, our B&B host in Cushundall, that they had a calf the night before. I had yet to meet her husband, Jared, but when I saw him drive in as we were heading out I went to ask him about the calf, hoping the girls and I would be able to visit. As it turned out he was just returning from saving the calf from the river, and though we were meeting for the first time his eyes filled with tears while he described the harrowing rescue of the newborn, punctuating (as I learned was his way) every few words with my name. “I’ll tell you Amie, the wee calf was down in the river, Amie, and I didn’t think I could get there Amie. The water, it was rushing all around me, Amie, and I was sure that calf was going to die in the water and rocks, Amie, but, Amie, I got to it, and, Amie, it’s just grand.” I too was crying by the end of the story.

5.       Wee. In the North, everything is wee. It often appears several times in the same sentence, as in, “you’ll just take the wee road to the right, and you’ll see a wee caravan park with a wee sign for your B&B…” It’s also used to describe things of giant proportion, like the largest meanest scariest mama cow I have ever seen who was described by farmer Jared as “a wee bit cross.” Every time I heard it, it made me giggle on the inside, even while trying to avoid eye contact with the mean scary mama cow. 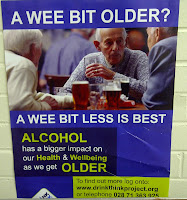 6.   The Singing Bar. We arrived in County Donegal, in the wee village of Rathmelton, just in time for there annual festival, which included, among other things, a “singing bar” competition. We didn’t know what that meant until we found ourselves in one. Apparently it’s a competition among pubs – a different pub in town has a different night of the week to impress the judges with the size of their crowds, the vibe of the evening, and the quality of the local talent. “Local talent” was anyone who could/would sing. A little band accompanied each performer, and before I understood what was happening I was put on a list and before long they called out “Amie from Montana” and our new friend from Great Falls yelled out “Brokeback!”  and there was no turning back. I survived! (Indecently, this was the second time someone felt compelled to yell the reference to Brokeback Mountain as I was approaching a critical moment. The first was at the closing ceremony for my course in Derry, just as I was receiving my certificate from Nobel Peace Prize winner and key architect of the Good Friday Peace Agreement, John Hume. Thanks, Barry.) 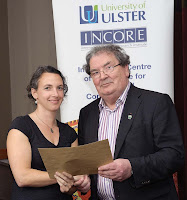 Meeting John Hume.
7.      Being taken home by Maria. This is really a placeholder for the amazing generosity of everyone we’ve met. I was walking along a coastal path, set to meet my family in a couple hours, and came upon Maria and Zhi-Zhi, her sweet greyhound cross. We walked for an hour, Maria telling me about growing up in Ireland and the troubles and her politics and then she took me to her little house - in process of renovation after a mudslide flooded the place - served me wine and we looked at paint chips and talked about Mexico, and about being women travelers. What a gift! And everyday had someone like Maria.

8.     Jersey Shore. This is a placeholder for all the cooky pub experiences that might have been gross/weird/scary had I not gotten to share them with Jenae...and because I DID get to share them with her, they were hilarious.  Jersey Shore was the name we gave to a young man in Portrush who was very excited to meet two Americans – especially one from New York. He said, “You know Jersey Shore? I love that show!” while he started sort of swaggering and pelvic thrusting and grabbing his boy parts and trying to put them on the table (someone will have to tell me if this has something to do with the reality TV show). It went on and on…“You know Snooky? I’m going to do her…” He was easily confused, thinking I was married to a much older man sitting near us, then relieved that I wasn’t, and then taking me aside and in a serious tone and asking, “why did you do that to your hair?” He thought I had streaked it grey (there are no grey haired women in Ireland, and I think just three colors of dye: platinum, red, and black). He was just one of the characters that particular night in that particular pub, and there were many characters (a rowdy crew of aging lesbians; an old man who only said “fuck off”, and said it often; a raucous hen party; etc.) – it is so special to experience these characters with a close friend!

Jenae on the bus.

9.    Roisin. I have written elsewhere about the affectionate cow. The girls and I sort of fell in love with her, named her Roisin (Row-Sheen), and visited her several times a day for the few days we were staying near her pasture. She would lick our shoes, thrust her neck forward into our faces and roll her eyes back when we scratched behind her ears, rub her head up and down the entire length of our bodies. I am certain now that my Rottweilers are part bovine.

10.    Sean’s Bar in Athlone. It’s apparently the oldest pub in all of Ireland, dating back to 991 A.D.  For real. It’s long and narrow, with various rooms, creating several different pub experiences in the same locale. The night Lauren and I were in, the front of the house had an “open set” going. Folks wander in with instruments, join a circle of musicians, and take turns leading songs. Everyone - from young punked out vocalists to old traditional flutists - accompanies one another, and we heard original tunes, old Irish folk songs, Poison, Delta Blues, James Taylor…It was my idea of heaven. In the back of the house was a 20 piece brass band, median age about 80, playing swing. Also incredible.

Throughout it all, the most significant experience for me personally was the gift of unstructured time. Particularly these last three weeks with my daughters, my husband, and myself. I have built a very full, rich life, a life which I am so incredibly grateful for. And, I rarely have significant stretches of unstructured time. What an amazing thing to settle into such a different schedule: to take whatever detour we wanted, to get lost, to walk without destination, to stay in bed on rainy mornings and read, to fall into conversations with strangers and take them to their natural conclusion, to patiently wait for sheep to cross the road.  I am so thankful for all that made this possible, particularly the board and staff at NCBI. The trip has been inspiring and restorative, and I am ready to come home! 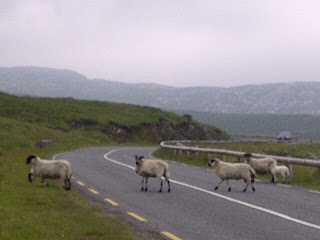