Though I've stumbled upon a handful of Orange Order marches since I've been here, with all the tension and conflict associated with the 12th of July, I felt ambivalent about attending any on the big day. A new friend (owner of The Tower Bar in Ballymoney) reminded me that's sort of why I'm here.

There were hundreds of marches yesterday, most of them completely uneventful. A couple made the news, with the most trouble in North Belfast. Lauren, the girls and I went to the little village of Rasharkin, population 800 or so, not far from where we are staying.

There are hundreds of different "lodges" of the Orange Order throughout Northern Ireland and beyond;  each choose different locations to march. It seemed like a dozen or so came to Rasharkin for the 12th.The march is really three waves of marches. First, over the course of several hours, each lodge marches through town to assemble. Some lodges are quite small - twenty or so people. About mid day, the full group marches back through town, heading the opposite direction. In Rasharkin I'd guess there were a couple hundred marchers in total. There they assemble again, have tea, snacks, and maybe a couple pints. Then, early evening, the full group marches through town a third time. Unlike U.S. parades that stick to main streets, Orange Order marches like to travel through neighborhoods as well. Things are more likely to get hot when the Order marches through Catholic neighborhoods, especially during the third trip through town, when marchers and neighbors may be a little sauced and some Catholic neighbors have had it with the "we won, you lost" feel of the day.

Rasharkin was one of the contested marches this year, as residents of a predominantly Catholic cul-de-sac had petitioned to keep the Orange Order from taking their traditional path through their neighborhood. The parade commission granted this request, and the Order had responded that this failure to allow them to march their traditional route was a breach of their civil rights. A resident group requested permission to protest (you have to do that here, as a result of the history of riots in Northern Ireland), and were allowed 50 people.

We rolled into town around 11:30. It really isn't much of a town - you could drive through it trying to find the city center. None the less it was decked out for the 12th, as all Protestant towns are here, with union jacks flying from every light pole.

We talked to a few Orange Order folks gathered at one end of town, learned the main march started at 1:00, and where to park so we could get out later. Though the streets were strangely empty, police were everywhere - about 8 per block for 10 blocks or so. We found the protesters gathered under a single tricolor - the flag of Ireland - in the parking lot of  the grocery store. It was a group of 15-20 men. They were in their own sort of uniforms - all wearing athletic jerseys and carrying hurling sticks.

The first guy we talked to told us they weren't really protesting, since the parade commission had swore to uphold the approved route. They were mostly just watching to document any abuse from the marchers. Watching with hurling sticks, Lauren asked? This is where we play, he responded. Any day you drive through town we'll be here, hitting the ball against the side of the store. As we waited for the marching to begin, they told us how the police didn't want peace, and to just watch how they egged people on. They told us that marching isn't the problem - each side should be able to celebrate their holidays - but that it doesn't have to be so "in your face." They shouldn't march through Catholic neighborhoods, and they don't need to put flags on every light pole. "We only put flags up every other one during our parades."

I talked with a number of police officers. The first guy I met was born and raised in Colorado (of course- just the way this small world works). He said we should make sure to come back to see the town on another day - "it's a really lovely village." Another officer and I chatted about why I was in town. When I said I lead peace-building work in the U.S., he said, "good - that's what we need- help breaking the circle..." and then got very philosophical about the state of the world.

A half hour before the march was set to begin the group of protesters began to swell a bit, some women joining in. Police formed a loose line in front of them, nearly matching them 1:1. A scuffle broke out in front of a pub down the street - the protesters said it was the cops bent on arresting them and having a reason to shut them out; the police said it was a domestic disturbance. A man walked by with his son in a stroller, and I overheard the woman he was with say, "at least having him here," implying the toddler, "will keep you safe," nodding to the police. 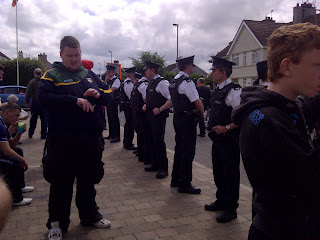 When the march finally got underway, the police formed a solid line between the marchers and the group. Things started to get hot when an officer began to tell the residents they needed to stand behind, rather than on, the sidewalk. Officers opted to just block and surround the group.

I'm used to U.S. style parades, where people line the streets and cheer, and paraders wave and throw candy. This march was a bit more somber. The Orange Order is a formal crowd. There are mostly men, though there are some women and children, all dressed in black. Men where bowler hats, white gloves, and orange sashes.  Each lodge seemed to have a band - which looks and sounds like a military marching band - and a group of people walking with banners illustrating the victory of Protestant King William of Orange over Catholic King James for control of Great Britain in 1690.

Here's a short clip to give you a feel.

We saw a few families out to watch the festivities, a few little ones dressed up in their red, white and blue (so strangely familiar), but not many.  I'm guessing that many of the Protestant residents were IN the march, leaving few people left to watch. I'm also guessing the threat of protest kept some from coming out. I'm told there are plently of bigger towns, with fewer Catholics, where the marches feel quite festive. This one seemed rather like something that had to be endured, by the marchers, the Catholic not-protesters, and the police officers. If felt more about making a statement than a celebration. And the statements that were intended to be communicated may be different that the ones that were received. Perhaps the Order is making a statement about Protestant pride; it can look and feel like a statement of power and supremacy. Perhaps the Catholic residents are making a statement of resistance, it can look and feel like bullying and hooliganism. I think the police were trying to represent order and safety; to the Catholic residents out yesterday they represented a threat.

I'll be thinking more about what this little experience in a rural community might mean for me and my work, what it might teach me about the nature of conflict, memory, and transformation...but for now I just wanted to record it.